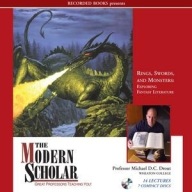 While thinking about the origins of Mythology in the Oral Tradition I remembered a great example from Professor Michael D. C. Drout. A Philologist and presenter of a Modern Scholar audio course on fantasy literature, Drout suggests that the fantasy genre as we know it is actually a resurgence of Traditional Oral Epic. Fantasy literature uses elements borrowed from Oral Epic and, by association, Myth; allowing us to grapple with complex themes of cultural importance and communicate them effectively in a way that can be replicated.

One of the earliest serious studies of folk lore and Oral Tradition from the 1930’s by Milman Parry and Albert Lord, found a longstanding tradition in the former Yugoslavia of visiting coffee shops during Ramadan. In these coffee shops people would enjoy renditions of epic tales set to the music of a one stringed instrument known as a ‘Gusle’ (pronounced ‘goo-sla’)

Parry and Lord studied the methods of the ‘Guslari’ and found that they had memorised a formulae which allowed them to recite the outline of a three to four thousand line story. This also meant that the stories where never quite told the same way, as the loosely improvised detail was added to this repetitive and formulaic structure. This is known as Oral Composition.

What is particularly relevant about this example as it relates to mythology, is that Parry and Lord identified that the Guslari made use of Hexameters, in a very similar way to the recorded works of Homer; ‘The Iliad’, and ‘The Odyssey’. However, when they examined the content of the stories they where able to identify other recurring motifs found not only in Homer but also other Epics of cultural and mythological significance such as Beowulf. From their work we can start to clearly identify connections between elements of Oral Tradition, Epic and Mythology, existing across a variety of cultures and representing a significant part of their development.