Myths can be organised into three broad categories; etiological, heroic and folk tales. This is of course contestable, as the Myth that fits neatly within the contours of any academic designation is very rare. These categories however, tend to be informed by what many scholars have attempted to identify as the functional purpose of Myth. The numerous and diverse theories form a spectrum of comparative mythology. I have briefly explored some of these in previous posts, such as the ability to define society or cultural identity and explain natural phenomena. Other functions are more subtle, such as communicating anxieties and unrest within the collective unconscious and, perhaps the most interesting and insightful function of rationalising psychological behaviours and impulsions.

It’s my intention to outline the three broad types of Myth here, and return to create links to posts that represent strong examples. There may be many obvious examples I could refer to, but until I’ve explored and posted about them, I’d rather not get ahead of myself. This might be a good time to cheekily hint that, if you like, you can follow my blog and receive email notifications each time I post. 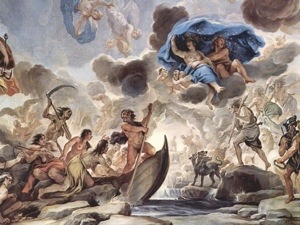 Etiological Myths are concerned with the divine, specifically, themes of creation and the actions of divine beings. Etiological Myths are chiefly set in the age of the gods, before the time of humans. They often interpret how mankind came to inherit the earth as it was (known as Cosmogony), or how humans first came into being. It is worth noting however, that gods and their actions, communications and general involvement of the affairs of humankind are visible across all types of Myth. There are Myths that also allude to either the early days of a utopian human existence, preceding the afflictions of disease, death and suffering, or the existence of an afterlife, that also capture an essence of the divine.

As a general rule, Myths that attempted to rationalise natural or psychological phenomena in the absence of scientific exploration seem best represented by this category. Deities are ascribed characteristics that associate them with specific phenomena, allowing people to interpret what they see around them as a reflection of that deities’ will, temperament or actions. Parallel to this ‘tangible’ interpretation of divine intervention, is the concept of human behaviour, action and emotion presided over by a custodial, divine being. A person overcome by their emotions or other such compulsions, may have been deemed helpless under the thrall of, or even temporarily inhabited by, the appropriated entity. Similarly, a person may be elevated beyond mortal ability when imbued or influenced by divine power. This is however, often very apparent in the second type of myth explored here.

Heroic myths are certainly not devoid of divine intervention, but are centred around the actions of mortal human characters who, more often than not, are descendants of the gods. Their divine lineage marks out these characters as heroes in their time, representing the best of humanity in terms of skill and ability, especially when concerned with fighting and combat. Whilst retaining ‘call-backs’ to etiological and divine myth, heroic myths appear less concerned with unexplained physical phenomena, as they are with social commentary and psychological exploration.

In some cases, as heroic myths are concerned with mortals and their burgeoning civilisation, they have a tendency towards historical recollections of actual or potentially true events; without dispensing fully with what we may describe in modern literature as the paranormal. It may be argued the the more grounded in realism a tale may be, the more apt it is to consider it Legend rather than Myth.

Folktales are less inclined to explore and explain relationships between humans, the natural world and the divine. They function rather to entertain, communicate instructional information and teach a moralistic lesson through allegory, in the manor of fables. This is not to suggest that they do not involve mythical creatures, magic, powerful artefacts and the like, as these elements can make for some of the most entertaining stories there are.

These elements are presented through some surprisingly specific and recognisable motifs and act metaphorically to communicate themes such as personal development or rights of passage. It is common for the protagonist of a Folk tale to demonstrate great wit and cunning in order to survive perilous situations or encounters with terrible creatures that represent some kind of social anxiety or concern.

From providing explanations of the world in etiological myth, exploring relationships between mankind and the divine, or preserving history through heroic myth, to demonstrating a social imperative through Folktales; Myths clearly serve a variety of recognisable and discrete purposes.Yet as myths may contain combinations and elements of all three categories discussed here, it may be frustrating or seem counterproductive to become too focused on setting out boundaries and distinctions. Approaching myths with a knowledge of these categories in mind however, may help deconstruct their intentions, therefore communicating both an understanding of the circumstances and times in which they were formed and an exposition of some longstanding issues that people continue to grapple with today.